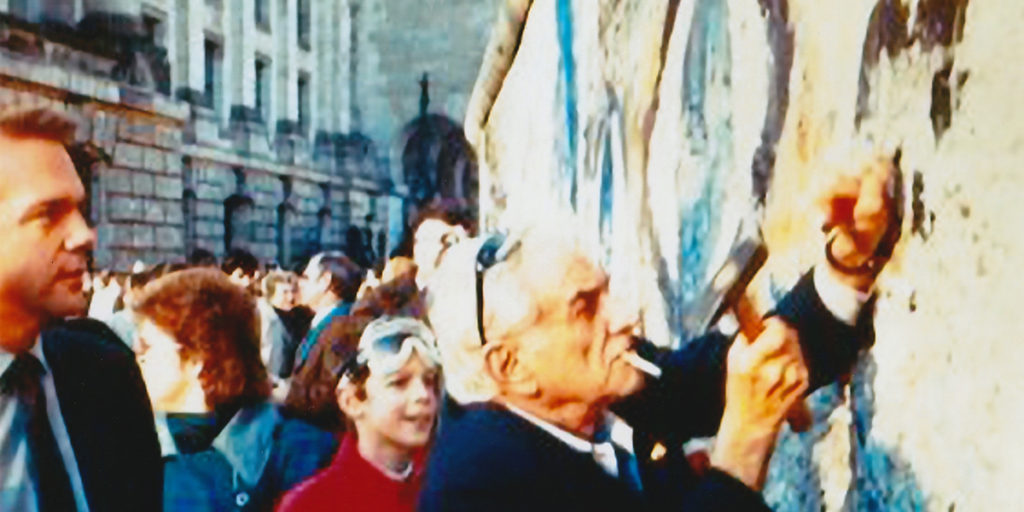 It was late December when Leonard Bernstein and I arrived in Berlin. Berlin was an excited city; historic change was taking place there. It was just weeks before that the government of East Germany had allowed its citizens to visit West Germany; the decades-long division of the city was literally crumbling.

The thrill of this new-found freedom was electric in the air.

Leonard Bernstein knew that this was a time for a grand musical gesture: he would conduct an international orchestra made up of members of the Bavarian Radio Symphony Orchestra, supplemented by musicians from the New York Philharmonic, London Symphony Orchestra, Orchestre de Paris, Staatskapelle Dresden and the Orchestra of the Kirov Theater, as well as the the Bavarian Radio Choir, Children’s Choir of the Dresden Philharmonic and the Radio Choir of East Berlin — not to mention a stellar cast of soloists — in a historic performance of Beethoven’s Symphony No. 9.

It is common knowledge that Leonard Bernstein, a lifelong advocate for freedom, took the liberty of changing the Schiller text from “Freude” to “Freiheit.”

He said at the time, smiling, “I’m sure that Beethoven would have given us his blessing.”

Under the gray winter skies, the muted sound of hammers chiseling at the Berlin Wall became the soundtrack of the city.

During the rehearsal period, Leonard Bernstein took pleasure in walking through the now opened Brandenburg Gate, mingling with the citizens of a soon to be reunited Berlin.

The moment weighed heavily on his heart as he remembered all the the suffering the city’s bifurcation had caused.

On Christmas Eve, Bernstein and his musicians presented the first “Freiheit Concert” in West Berlin’s Philharmonie.

It was also presented by a live feed onto a large screen, for a freezing but appreciative audience on the plaza of the Gedänkniskirche in West Berlin.

But it was the concert on Christmas morning in the Schauspielhaus (now the Konzerthaus) in East Berlin that caught everyone’s imagination, not only among the public who watched on the big screen on the Gendarmenmarkt, but also of those who watched the live television broadcast — over 100 million viewers worldwide.

All were moved by the magic of hearing the word “Freiheit” sung from the rafters.

No words can describe the reverent energy, happiness and grave responsibility that was felt in the hall.

Even as I write all these years later, my eyes well up with tears, for we all felt a great divide had been healed.

Leonard Bernstein did not believe in division, and here was a dream of reunification come true.

Everyone gave their all, and the performance was a historic moment captured forever on film and audio.

As a final gesture after the concerts and receptions, Lenny and I, with a couple of friends, drove to the western side of the wall behind the Reichstag: no television, no reporters, just us private citizens of the world.

Leonard Bernstein borrowed a hammer from a young boy, and he took his turn at tearing down a piece of this physical wall, among all those psychological and spiritual walls he’d so worked so hard to dismantle in the hearts and minds of human beings around the world.