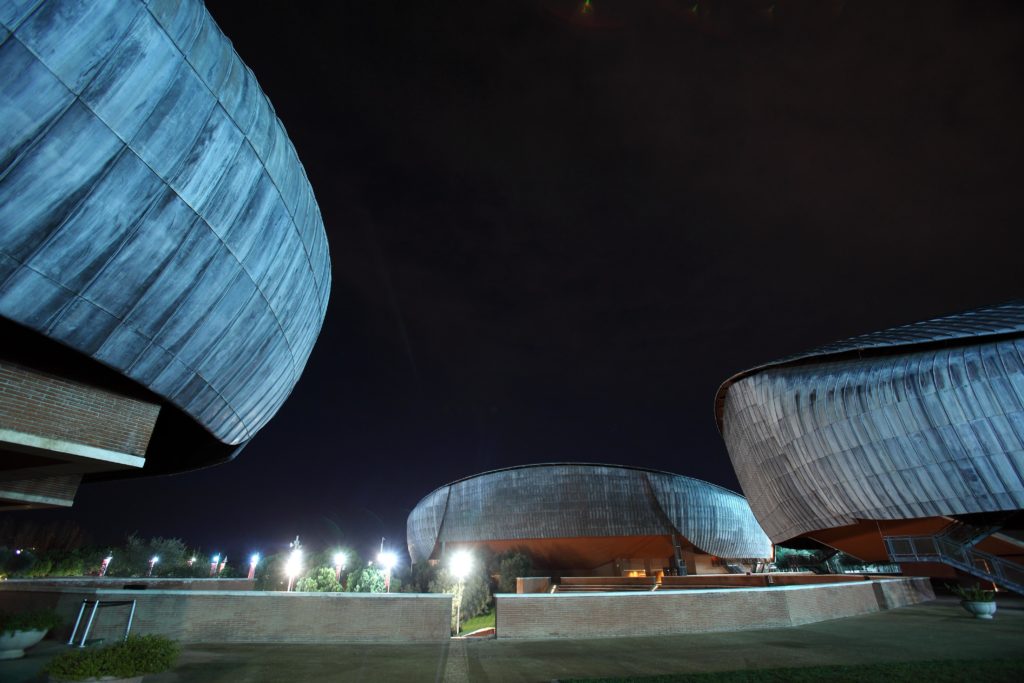 This concert hall in Rome is one that was constructed after Leonard Bernstein’s death, so I was never there with him.

The Sala Santa Cecilia is home to the Accademia Nazionale di Santa Cecilia, the principal orchestra of Rome, that Bernstein was President of and conducted on a regular basis.

The Sala Santa Cecilia is part of Parco della Musica, a large public music complex in Rome, Italy, with three concert halls and an outdoor theater in a park setting, hence the name.

It was designed by Italian architect Renzo Piano. Jürgen Reinhold of Müller-BBM was in charge of acoustics for the halls; Franco Zagari was landscape architect for the outdoor spaces.

Parco della Musica lies where the 1960 Summer Olympic Games were held, somewhat north of Rome’s ancient center, and is home to most of the facilities of the Accademia Nazionale di Santa Cecilia.

Structurally separated for sound-proofing, they are nonetheless joined at the base by a continuous lobby. The architecture is contemporary and the outer architectural form has led to nicknames such as “the blobs,” “the beetles,” “the turtles,” “armadillos” and “the computer mice”.

The outdoor theater, called the Cavea, recalls ancient Greek or Roman performance spaces and is fan-shaped around a central piazza.

During construction, excavations uncovered the foundations of a villa and an oil-press dating from the 6th century BC. Renzo Piano then adjusted his design scheme to accommodate the archaeological remains and included a small museum to house artifacts discovered, delaying the project’s completion by a year.

Parco della Musica was inaugurated on 21 December 2002. Within a few years it became Europe’s most-visited music facility. In recent years it has had over two million visitors, making it the second-most-visited cultural music venue in the world, after Lincoln Center in New York.

The Sala Santa Cecilia is a large hall but it is warm and welcoming. In many ways you feel like you are in the inside of a cello.

Every seat has a great sightline and the acoustic is wonderful.

I have enjoyed many wonderful concerts here, and look forward to more.

Though outside the center of Rome, it is easily accessed by a Tram that runs almost directly to the Park. The tram leaves from Piazza di Popolo.